“The Unique Apparition of a Distance”: Aura in Julie Chen and Elizabeth McDevitt’s Octopus 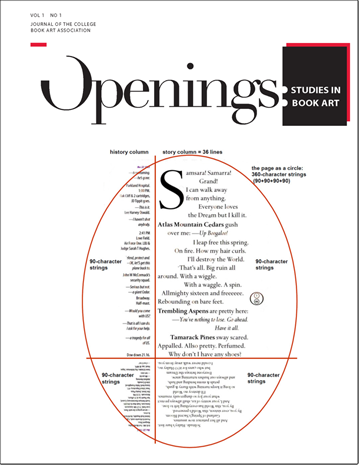 The distinction Walter Benjamin makes between unique and mechanically reproduced art would seem to fit easily into the field of book art.  Like the sculptural bookwork, Benjamin’s unique work is located in a single place, seems distant from the viewer, and is steeped in ritual.  Similar to the democratic multiple, Benjamin’s technologically reproduced work allows art to serve a political function.  Benjamin writes that the aura, defined as “the unique apparition of a distance,” is part of the unique work, but is lacking in the multiple.  Although the field of book art ostensibly supports the distinction between the auratic, unique work and the political multiple, a closer reading of the artist’s book ends up complicating this binary.

Octopus is a 1992 limited-edition work designed by Julie Chen, with text by Elizabeth McDevitt.  Its form is a tunnel book, a three-dimensional, underwater scene.  At the back of the book, the tentacles of an octopus lurk behind the text of a poem.  The poem speaks of disguise, particularly within language.  The book’s form physically hides the text, while the poem’s language simultaneously conceals and reveals.  Octopus thematizes distance in its textual content and its physical structure.

Like many of Chen’s works, Octopus seems like a unique object despite being part of an edition.  Due to its high cost and small edition size, the reader is likely to encounter it in a library or an exhibit, rather than own it.  The delicacy of Chen’s works create a different atmosphere than more traditionally bound artists’ books.  Once Octopus is extended, the reader must change position: if it is on a table, the reader must crouch to view the content.  Octopus requires the reader to bow down to it, like the auratic art that Benjamin describes.  As the content and effects of Octopus show, aura is not inherent to specific unique objects, but instead is a sense of reverence evoked in the reader by the book’s value and the collecting institution’s attitudes.