This article examines portrayals of sexuality in video games, particularly in terms of the increasing inclusion of queer and non-normative sexuality. This increasing diversity of representations remains rife with problems, however, ranging from the privileging of female queer identity over male queer identity in much of the Mass Effect series, to the “gay button” issue of having queer content only accessible through player effort to locate it. In order to examine both this progress and its problems, this article primarily uses close readings of game texts including the Mass Effect series, supplemented by key existing critical work on in-game sexuality (Consalvo, 2003; Shaw, 2009; Greer, 2013). The article begins with an application of Adrienne Rich’s concept of “compulsory heterosexuality” to game worlds and examines the privileging of certain sexual activities and identities in games using Gayle S. Rubin’s concept of the “charmed circle”. Both of these concepts are applied to games more generally, and then to the work of game development studio BioWare particularly with a focus on their Mass Effect series. This article concludes with a consideration of some work by independent developers that both expand and critique the hierarchies of sex and what the mainstream game development community could learn from these projects. 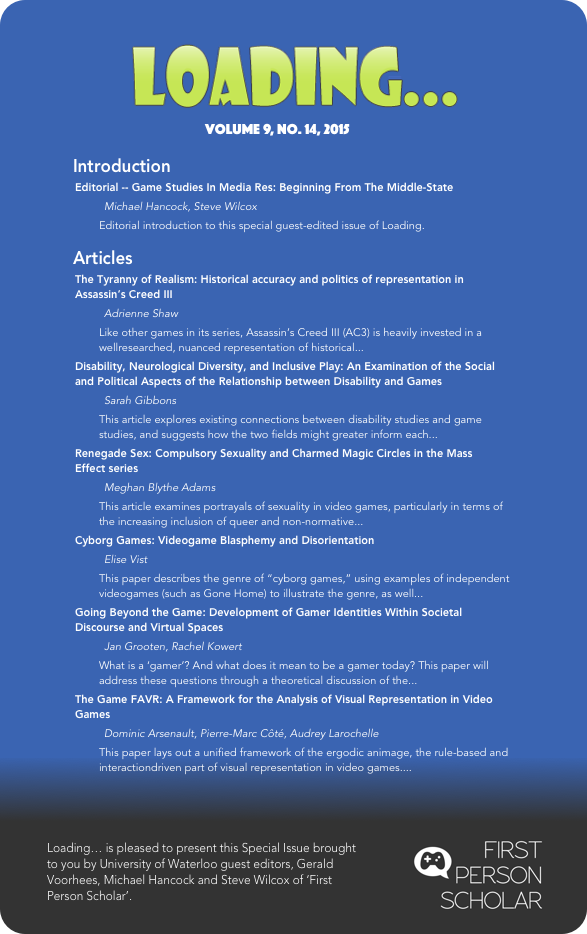 Published
2015-11-15
Issue
Vol 9 No 14 (2015): Special Issue: Game Studies In Media Res
Section
Articles
The copyright for work in this journal is retained by the author(s), with first publication rights granted to the journal. In keeping with a Creative Commons license, articles are free to use with proper attribution (to both the author and Loading…) for educational and other non-commercial uses.
Open Journal Systems
Language
Information
Hosted By