In order to advance our understanding of educational processes, we present a tutorial of intraindividual variability. An adaptive educational process is characterised by stable (less variability), and a maladaptive process is characterised by instable (more variability) learning experiences from one learning situation to the next. We outline step by step how we specify a multilevel structural equation model of state, trait and individual differences in intraindividual variability constructs, which can be appropriately fitted to intraindividual data (e.g., time-points nested in persons, intensive longitudinal data). In total 285 primary school students’ (Years 5 and 6) completed the Learning Experience Questionnaire using handheld computers, on average 13.6 learning episodes during one week (SD = 4.6; Range = 5-29; nepisodes = 3,433). We defined mean squared successive differences (MSSD) for each manifest indicator of task difficulty, competence evaluation and intrinsic motivation. We also demonstrate how to specify multivariate models for investigating convergent validity of the variability constructs. Overall, our study provides support for intraindividual variability as a construct in its own right, which has the potential to provide novel insight into students’ learning processes.

There is a growing interest in the study of students’ learning processes using diary and real-time data (Schmitz, 2006). These micro-longitudinal studies expand our knowledge about learning processes beyond what we can learn from single time-point cross-sectional studies, in at least three ways. First, there is considerable variation in students’ learning experiences, e.g., their engagement, beliefs, motivation, emotions, and performance from one situation to another (i.e., intraindividual variation), more so than there is variation between students (i.e., interpersonal variation; Schmitz & Skinner, 1993). Second, situation-specific learning experiences vary as a function of contextual features, such as perceived autonomy support (Tsai, Kunter, Lüdtke, & Trautwein, 2008), and extrinsic motivation (Malmberg, Pakarinen, Vasalampi, & Nurmi, 2015). This means that situation specific opportunities and constraints, such as provision of support and levels of expectation, form an integral part of students’ learning experiences. Third, students’ individual characteristics can moderate the relationship between experiences. Compared with relatively lower achievers, higher achievers had more stable control beliefs and perceived task ease from one situation to the next (Musher-Eizenman, Nesselroade, & Schmitz, 2002), and exerted more effort when confronted with difficult tasks (Malmberg, Walls, Martin, Little, & Lim, 2013). What we know less about is the intraindividual variability in students’ learning experiences from one situation to the next. Whilst intraindividual variation captures the differences between individuals’ experiences above or below their own average experience (i.e., an “individual standard deviation” of own “ups” and “downs”), intraindividual variability, inconsistency, or instability refers to the magnitude of short-term fluctuations in the order of the ups and downs from one time-point to the next (e.g., Jahng, Wood, & Trull, 2008; Kernis, Grannemann, & Barclay, 1989). This magnitude of intraindividual variability is larger when the shifts between highs and lows are more abrupt, occur more often, and the swings go from one extreme to the other. In the present study we go beyond previous real-time studies of students’ learning experiences in two ways. First, we propose a methodology for specifying a within-person variability construct alongside state and trait constructs, using state-of-the-art multilevel structural equation models (MSEM). The MSEM allows us to model latent constructs net of measurement error at two (or more) levels of data. Second, we include teacher perceived student task-focus as an indicator of convergent validity of students’ intraindividual variability. Accumulated research shows that students, who in the eyes of their teacher are generally task-focused, are: intrinsically motivated, deploy task-focused rather than task-avoidant behavioural engagement, exert effort, seek help when they need it, and persist when they encounter difficulties (Eccles, Wigfield, & Schiefele, 1998; Nurmi, Hirvonen & Aunola, 2008, Zimmerman, 2000). It would be important to know whether students who teachers regard as task-focused, are also more stable in their learning experiences, i.e., less variability in students’ perceptions of task difficulty, competence beliefs and intrinsic motivation from one learning situation to the next. To this end we provide a brief overview of intraindividual research in education, task-focused learning, a didactical example of the mean squared sequential difference (MSSD) index of intraindividual variation, and an MSEM specification.

There appears to be a surge in intraindividual research in education. Since the seminal diary studies by Schmitz and Skinner (1993) and Musher-Eizenman et al. (2002), an up-swing in the number of publications has been seen, for example Schmitz and Wiese (2006), and Tsai et al., (2008). Recent studies have used experience sampling of students’ academic emotions (Goetz, Frenzel, Stoeger & Hall, 2010), coping with boredom (Nett, Goetz & Hall, 2011) and metacognitive strategies (Nett, Goetz, Hall & Frenzel, 2012); ecological momentary assessment studies of effort exertion, competence beliefs and task difficulty (Malmberg, Walls et al., 2013); and contextual activity sampling of university students’ challenge, competence and emotions (Inkinen et al., 2013). Data in these studies were collected at multiple time-points in their natural settings, as close in time as possible to events, thus reducing retrospection bias (Wilhelm, Perrez, & Pawlik, 2012). The importance of the intraindividual perspective on learning experiences is threefold. These studies pave the way for understanding, first, learning processes as they occur in real-time; second, individual differences in such learning processes, and third, how teachers might differentially support individual students. Taken together, an intraindividual approach to learning can help us understand both learning processes and the ways in which teachers can support these (Schmitz, 2006).

A range of techniques have been suggested for aggregating measures of within-person variability (for a review, see Jahng et al., 2008): the intraindividual standard deviation (or variance), first-order autocorrelation coefficients r, and the mean square successive difference (MSSD; von Neumann, Kent, Bellinson, & Hart, 1941). While the intraindividual standard deviation is intuitively appealing, it does not capture the frequency of change (Larsen, 1987). The MSSD calculates an aggregate that takes the sequential order of the events into account (Equation 1).

where xi + 1 is the lagged value of xi. The squared difference between xi + 1 and xi assures that the magnitude of the successive differences is captured. There are n-1 observations in the dataset (see Appendix 1). In a didactic simulation shown in Figure 1 we exemplify the conduct of the mean (M), standard deviation (SD), the mean square successive difference (MSSD), and the autocorrelation (r), in three scenarios (Panels A, B and C). For a similar simulation see Jahng et al. (2008).

When we observe the raw data in Panel A (Figure 1) we find that the M and SD are the same as in Panel C, in which the data has been rank-ordered in descending order. The M and SD in Panel B, in which each data-point has been multiplied by two, are the same as multiplying the M and SD of those in Panel A by two. While the SD indeed captures variation, it is not sufficient for capturing the magnitude of variation. The stability over time captured by the autocorrelation r remains the same in Panels A and B, demonstrating that r does not capture the magnitude of change either. The autocorrelation coefficient r is different in Panel C demonstrating that the order of events matter. Finally MSSD differs in all three Panels demonstrating that it is both sensitive to magnitude (Panel B) and order of change (Panel C). In the present study we use MSSD for investigating intraindividual variability.

In previous studies, a range of models for investigating lagged associations have been specified, including time-series and spectral analysis (Larsen, 1987; Ram et al., 2005), the mixed-effects location scale model (Li & Hedeker, 2012), generalized multilevel model (Jahng et al., 2008), and mixture distribution models (Eid & Langeheine, 2003). However, these models do not correct for measurement error in constructs. To do so, we calculated MSSD for each indicator of our latent constructs and modelled these using multilevel structural equation models (MSEM). Although time-series typically requires longer stretches of time-points, the MSSD method is suggested to be robust also for shorter time-series e.g., a number of time-points during each day (Ebner-Priemer, Eid, Kleindienst, Stabenow, & Trull, 2009). 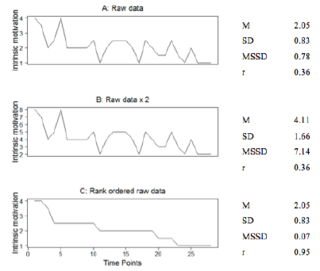 Note: Panel A represents one sample student for whom 29 situation reports were observed for intrinsic motivation (1 = low motivation, 4 = high motivation). Panel B represents each numerical value in Panel A multiplied by 2, so the scale now spans 2 to 8. Panel C represents the raw data from Panel A but now rank-ordered in descending order. M = Mean, SD = standard deviation, MSSD = the mean square successive difference, and r = autocorrelation.

In total, 353 students in 16 classrooms in 11 schools participated in the Learning Every Lesson (LEL) study (for details see Malmberg, Woolgar, & Martin, 2013; Malmberg, Walls et al., 2013; Malmberg et al., 2015), with informed parental or guardian consent. The study was carried out in two quite diverse areas in southeast England, UK. Students were asked to complete the electronic Learning Experience Questionnaire (LEQ) for Personal Digital Assistant (PDA) at the end of each learning episode or at least once per lesson. Teachers or teaching assistants were asked to complete a brief one-page report of each student they taught. Teaching arrangements differed across the classes. In half of the classrooms, one teacher reported on all his or her students; in four classrooms two teachers reported on the students; in two classrooms, there was a mix of students with one or two teacher reports; and in another two classrooms, two or three teachers reported.

In order to investigate the correspondence between students’ and teachers’ views of the students, in the final study sample we included all observations for which both teacher and student reports for any given student were available. The intraclass correlation for teacher-reported task-focus was rICC = .08 between classrooms and rICC = .08 between teachers (Malmberg et al., 2015). In order to not burden the models with additional hierarchical levels, teacher reports were aggregated for each student, weighted for the number of experiences with each teacher. However, for the purpose of aggregating MSSD-indices of the lagged relationships between the time-points, we carried out analyses for those students who had at least five time-points of data available (roughly the possible number of reports per day). There were 285 students who reported on 3,433 learning episodes: on average 13.6 learning episodes (SD = 4.6; Range = 5-29) combined with 434 teacher reports (139 students had one teacher report, 143 had two reports and 3 had three reports). Of these there were 126 boys (44.2%) and 159 girls (55.8%), 104 were in Year 5 (36.5%) and 181 in Year 6 (63.5%). They were 10.5 years old on average (SD = 0.64).

Students completed a single item measuring task difficulty: “The learning task I was doing was”, on a four-point scale (1= very easy, 4= very hard).

Students were asked “why were you doing this task?” and responded to three items measuring intrinsic motivation: “I enjoyed it”, “I chose to do it”, and “I was interested in it”. When we split the data by day and learning experience, the average internal consistency was Mα = .85 (SDα = .09).

Teachers reported on each student’s task-focused characteristics and behaviour.

We used teacher-reports of each student’s task-focus in school in general. Task-focus was measured with six items modified from the Observer-rating Scale of Achievement Strategies (OSAS; Nurmi, & Aunola, 1998), and the Behavioural Strategy Rating Scale II (BSR-II; Aunola, Nurmi, Parrila, & Onatsu-Arvilommi, 2000; Zhang, Nurmi, Kiuru, Lerkkanen, & Aunola, 2011). Teachers were asked to think about each student’s behaviour and work habits in class, and respond on five-point scales (0 = not at all, 1 = rarely, 2 = sometimes, 3 = often, 4 = very often), to what extent each of the six statements characterise the way each student typically behaves in learning situations. Half of the items were positively worded (indicating task-focus): “actively attempts to solve even difficult tasks”, “demonstrates initiative and persistence in activities and tasks”, and “tries hard to finish even difficult tasks”. The three negatively worded items (indicating task-avoidance) were: “has a tendency to find something else to do, instead of focusing on the task at hand”, “gives up easily”, and “loses focus if a task or activity is not going well” (α = .88). We specified the construct so that higher values indicated more focus on tasks. Task-focus was strongly and positively related to academic performance (Malmberg et al., 2015).